Sorry for the radio silence over the last few days. Mel and I were in Venice from Thursday to Sunday. Back now, ready to crack on with the last couple of these. So, David Lindley, as promised. Yes, I know that two Jackson Browne-related pieces within a couple of weeks of each other is not great timing, but I imagine it’ll be a while before he comes up again!

Jackson Browne could write a tune and turn a phrase. It’s been said many times before, but “Don’t confront me with my failures; I had no forgotten them” is an astonishing lyric for a 17-year-old to have written (even if no one that age could truly understand what it is to irrevocably fail at anything), so let’s give the man his due. At this best, he has been a very powerful writer.

But, to be picky, within Browne’s work there has always been a sense that, just maybe, the head is faking the heart’s business (as Ian McDonald once said of Elvis Costello); the same man that could craft something as sharp as the line above from These Days could also write something as gauche, as unwieldy and as far removed from the syntax and rhythm of everyday speech as, “Fountain of sorrow, fountain of light/You’ve known that hollow sound of your own steps in flight” (and this in a song that is widely loved).

So Browne needed David Lindley, then, to add fire to his music, to cut through the bullshit and the extended metaphors, to be both head and heart at the same time. Lindley plays with a fierce passion, his deft technique always evident but never at the expense of meaning. Within Browne’s music, he clarifies, he amplifies and he puts into sound what it is Browne’s trying to say in words: think of those two, sobbing high F notes he plays at around 4.10 on These Days – for all that the song’s lyric is impressive, nothing in the words communicates regret and sadness like those two desperate notes from Lindley’s guitar.

Lindley’s slide playing is hugely inventive, and his renown rests largely upon it, but the song I would nominate as containing my favourite Lindley work isn’t a slide piece. It’s Late for the Sky, which is a masterclass in how to play lead guitar alongside a singer. Containing beautiful short solos during the intro and the coda and a long one about three minutes in (after the first chorus), Late for the Sky also sees Lindley weaving sinuous lead guitar lines in and around Browne’s vocal. His tone is thick and creamy, and his rapid vibrato (if I’m hearing right, he uses a horizontal technique rather than the rock player’s up-and-down method, possibly more derived from his slide playing than from classic guitar) and slowly released bent notes (see 3.26) essentially narrate the song with Browne, who was truly blessed to have him in his team.

If I could play electric lead guitar like anyone, it would probably be David Lindley. 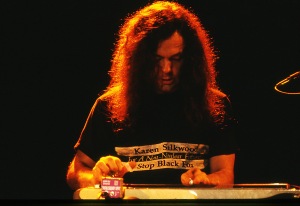