I should acknowledge upfront that I would never have heard this song if it hadn’t been written about by Pete Paphides in the Beside the B-Side blog he and Bob Stanley wrote very sporadically between 2010 and 2012. Possibly it’s not dead and just sleeping. I hope one day it comes back.

Woodwind, percussion, a sitar drone. When it starts, Colorama’s Turnham Green sounds cut from the same cloth as the Portico Quartet’s Life Mask, which I think I’ve written about here before. But the moody, free-time intro is actually an 80-second fake-out. When the song begins, it has two obvious precursors: in mood, it strongly recalls the sun-drenched psychedelia of Donovan in his Sunny Goodge Street phase, a whimsical, light psychedelia with just the merest hint of late-afternoon shadows; while in rhythmic feel (and in its chords too), it’s a dead ringer for Tim Buckley’s Strange Feelin’.

This sort of bucolic English acousticism – and for all that Turnham Green is self-evidently set at the point where inner London starts to bleed into Outer London, it is a bucolic song, and for all that Carwyn Ellis is self-evidently Welsh, it is an English song – was a staple of 1970s progressive/alternative music. EMI’s Harvest Records imprint, home to such artists as Kevin Ayers and Barclay James Harvest, was its ground zero, and Witchseason (Joe Boyd’s management/production stable) an important forerunner. This kind of music is somehow durable. It might disappear for a few years (the coked-up 1990s were an inhospitable decade for it), but it always seems to return, with a faraway look in its eye and a joint in its pocket.

I like the idea that there’s a form of music just floating out there on the breeze, ready to be plucked out of the air by any songwriter who reaches for it. Indeed, Turnham Green is not all that indicative of Colorama’s usual style, which is as likely to feature vintage monophonic synths as jazzy piano and strummed acoustic guitar. Sometimes Ellis’s work recalls the smashed and slightly scary Beach Boys of Smiley Smile. Sometimes Ellis is a Les Cousins troubadour. Sometimes he’s a Super Furry Doppelganger. Turnham Green, such a perfect little moment, sounds as if he just reached out his hand and found it resting there. And if it’s not quite of the same mood and feel as the rest of the band’s debut album (Cookie Zoo), I don’t think it says anything negative about Ellis to say that, at least early in Colorama’s journey, he didn’t quite know what he wanted to be. Stylistic consistency is overrated, anyway: the last refuge of the unimaginative. 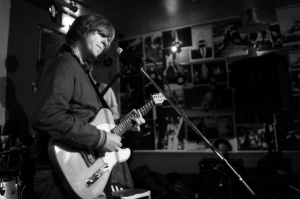 Carwyn Ellis of Colorama, live in 2009

Hi all. I’m working on some longer form pieces for various Christmas-related things, and I don’t want to reprint them here, so I find myself unable to write a standard post this morning. Instead I’d like to talk about guitar solos in series of looser posts over the next few days. I hope you’ll indulge me!

I’ve been playing guitar since 1995. I’ve got a bag of tricks that’s reasonably broad and eclectic. But I can’t play really fast and my string-bending technique isn’t what I’d like it to be, so to my way of thinking, I’m not a real lead guitarist – I’m a good rhythm player who can give you the odd solo.

I’d love to be a proper lead guitarist, to have David Gilmour’s compound-bending ability, to be able to summon up Hendrix-like pyrotechnics, to have the imagination of Tom Morello, the lyricism of Robbie Robertson, to be able to play slide like Lowell George or Bonnie Raitt. It’d be awesome.

I can’t do that stuff, but I spend a lot of time listening to great players, great soloists. Let’s talk about some of them. I’ve resisted any overly obvious choices, or any excessive fret-wankery, so they’ll be no Clapton (if I have to explain why, you’re reading the wrong blog), no Joe Bonamassa, no Satriani, no Vai, and – of course – no Yngwie Malmsteen.

1) Shutout – The Walker Brothers (from Nite Flights. Solo by Les Davidson)
Nite Flights marked Scott Walker’s return to adventurous music-making after an alcohol-sodden mid-seventies lull. He made some great records during this period, but seemingly only by accident, through his undiminished voice and a still-functioning ear for a good cover. But as a songwriter, he was becalmed.

His four songs on Nite Flights (the last Walker Brothers album), then, marked his return not just as a maker of vital music but as a writer of vital music. The Electrician is the song most predictive of his latter work, but Shutout is the ear-grabbing album opener, the statement of intent.

Other than The Electrician, about which a whole volume could be written, Scott’s songs on Nite Flights are built on the ubiquitous late-seventies disco beat, but this is avant-garde disco, post-apocalytpic disco. How else are we supposed to take the gnomic lyrics, of which few lines make much immediate literal sense (these lines include ‘Something attacked the earth late last night’ and ‘There were faces bobbing in the heat)?

Les Davidson was the guitarist given the job of playing the song’s solo. Having to make your guitar sound like Bad Things Are Happening is always a fun challenge, and Davidson takes an ear-grabbing approach. Rather than go for sheets of noise and texture (perhaps he would have done if it had been made just a year later), he instead goes for face-melting speed. He’s present at the start of the song, playing a howling, string-bending lick in the intro, with its piercing feedback-laden sustain, but it’s at 1.03 that he really makes his presence felt, with a solo so unexpected that you’re left stunned at the inappropriateness of it all. Within a few years, every single note of Davidson’s 27-second solo would be a cliche – every idea, every phrase, every legato run pounded into the dirt by overuse. But in 1978, high-gain, high-speed soloing was still novel (Nite Flights was recorded the same month that the first Van Halen record was released), and in the context of this sort of record, vanishingly rare. Obviously enjoying it, the producers (Scott Walker and Dave McRae, though I suspect that Scott took the lead when producing his own songs) push the solo proudly to the front of the mix, almost as a provocation.

Davidson went on to a stint in Sniff ‘n’ the Tears and has played guitar with Joan Armatrading, Donovan, Mick Taylor, Paul Rogers, Pete Townshend, Rumer and Laura Mvula. It’s this solo, though, that will be his epitaph. 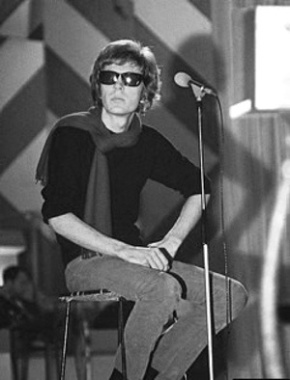