I first heard Leonard Cohen’s A Thousand Kisses Deep, from 2001’s Ten New Songs, while staying at my friend Yo Zushi’s flat after a recording session in London, six or seven years ago. It hit me immediately as a wonderful song, and this is not a reaction I have had that often to Cohen’s music, much of which I like, but almost all of which I have to feel my way into slowly over repeated listens. Late at night after a long, draining day, as semi-background music, in a city that I knew well but no longer called home, it sounded remarkable.

The next time I listened to it was at home, after acquiring my own copy, on my big old hi-fi (God rest it, wherever it now may be). The spell was broken. The song was still a multi-layered thing of wonder, but it stood revealed as, like so much of his post-seventies work, a risible piece of recorded music. His semi-spoken vocal wasn’t the problem, and neither was the arrangement. It was the execution. Sharon Robinson, Cohen’s collaborator (producer, backing singer and occasional co-writer) on Ten New Songs, had put together the backing tracks to all the songs, but on what sounds like the cheesiest, chintziest keyboard that Casio manufactured in the mid-1980s. It wasn’t what had been played, but what it had been played on. Up loud on my big hi-fi speakers, the recording’s deficiencies were no longer ignorable.

But still infatuated with the song, I went fishing for covers. Surely hundreds of singers had wanted to get their teeth into so meaty a text as this? And surely one of them was a recording worthy of such a piece of writing? Searching the song title on iTunes showed that while relatively few artists had attempted the track, among the ones who had was an A-lister. Jackson Browne. His version comes from a live album called Acordes con Leonard Cohen from 2006. It was recorded at a Cohen tribute concert in Barcelona, with Browne one of the few English-speaking artists on the bill (most of the songs are sung in translation). How and why Jackson Browne ended up on the bill, I couldn’t say.

Browne has always been a better writer than a singer, so I was really curious to hear how he’d do singing someone else’s material. To my surprise, his version allowed me to fall in love with the song again. Performing this song, singing Cohen’s words, the eternally boyish Browne sounds altogether deeper and darker, going to places as a singer I’d never heard him go before. He burrows into the song and explores all of its possibilities from the inside, sometimes just savouring the sound and feel of the words. There are still elements of Cohen’s version I prefer; Browne gives it a good go, but he can’t match the sense of condescension, menace even, that Cohen brings when delivering lines like “You win a while and then it’s done, your little winning streak”. Nevertheless, Browne’s reading of the song is thoroughly creditable, and the magnificent band utterly transfigure Robinson’s arrangement (again proving that what she’d written was good, but that she and Cohen had erred in not cutting the record with a real band), particularly Javier Mas with his reading of the instrumental of the instrumental hook on the bandurria 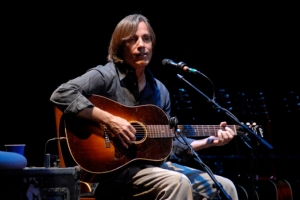