Not The Sound of Bread, which is a 1977 compilation album (subtitled “Their 20 finest songs”). But the sound of Bread. As in, what their records sound like.

Mel asked me last week whether my songs had been influenced by Bread. She knew I have some of their music (I’d put Baby I’m-a Want You on a mix CD of cheesy stuff for her), and I’m sure I’d told her that my parents had owned the aforementioned Sound of Bread compilation and we used to listen to it sometimes on car journeys. She’d been listening to If and the question had occurred to her.

Truthfully, there’s no Bread influence. I didn’t like that album much at all when I was kid (I thought Everything I Own was pretty, but knew and preferred the Boy George cover version), finding the music boring, or samey, or something. I didn’t find their songs speaking to me till I was in my mid-twenties, when I picked up a best-of for a few pennies on Amazon.

Bread, as you probably know, never have been critically revered, and it’s not really my intention to pile on any more than I have to, not least because they’ve tended to be hated for what they’ve been perceived to represent, rather than what they were:

Soft rock, they called the sort of music Bread made, anything to blot out the real world, transient comfort. Rock, it had finally been revealed, had indeed gone soft in the head, indulgent, cosseting rather than provoking

Marcello Carlin, Then Play Long review of The Sound of Bread

Carlin’s not as hard on the band as that sentence suggests, by the way, and his write-up of the record (a UK number one in November 1977) is excellent. (Christgau, for one, has been much more scathing, again for what he assumed the band as its lead member to be: “Even in fun I can’t work up much feeling for an ass man as mendacious as David Gates”.) Carlin does get at the chief flaw of the band: they worked their formula so remorselessly that it gets wearying over the course of one best-of album and leads you to conclude that in order to keep cranking this stuff out, it couldn’t have meant very much to the band’s writers (Gates on one hand, and the team of Jimmy Griffin and Robb Royer on the other; Royer was the band’s founding bassist and continued writing with Griffin after he left). Gates, for all his melodic invention, was a hack lyricist: while If survives its sixth-form similes, Aubrey is strangled at birth by its dogged, incompetent end-rhyming:

An exasperated Oh for fuck’s sake was my response on reaching the word “blame”. The first time he had to rhyme “name” with something other than “name” and that’s the best he could do? Why didn’t this man get himself a lyricist?

So yeah, I guess I’m not a big fan of David Gates and Bread. But you’ve got to give the man his due: he could certainly write a tune, and his mournful, soft voice was appealling. And I’m happy to go into bat for Baby I’m-a Want You, Make it With You, If, It Don’t Matter to Me, The Guitar Man, Everything I Own and Lost Without Your Love. There’s way, way too much musical invention, sheer melodic facility, in those songs to deny them. The middle section of It Don’t Matter to Me — six bars in which the vocal part suddenly goes into double time (the hi-hats do too, but the kick and snare stay with the feel of the verses) and the key changes after every two bars — is proof enough of Gates’s songwriting craft.

But what really lifts their best songs (and their best songs are so good it’s frustrating how mediocre most of their material was) is how lucidly they were arranged, recorded and mixed. Gates was a former record producer for A&M (he produced the first two singles by Captain Beefheart & the Magic Band), and his work on his own records shows as thorough an understanding as is possible of how to put this stuff together.

It’s stripped to the bone, for starters. Many of their songs make do with just a couple of tracks of guitars, bass, drums and vocals, as if they were a 1964 beat group that just happened to be playing early-seventies soft rock. The mixes unvaryingly make use of LCR panning, too – a technique in which a track is assigned to the left channel, the right channel or the centre of the stereo image, but never anywhere in between. This tends to create a very stable stereo picture, and a wide, spacious-feeling mix, but it’s a technique avoided by a lot of mixers, scared of pushing a crucial element in the arrangement (a vocal, or a rhythm guitar part or – gasp – the drums) out to one side only. Gates was unafraid, though, and his bold approach to instrument placement within the stereo field resulted in mixes that were defined by their clarity, their roominess. The recordings welcome you in, they sound inviting. They’re big, but intimate at the same time (echo on the voices and instruments is perceptible, but subtle – there’s no cavernous, fake-sounding reverb on anything).

These are all things I could say have influenced my own thinking about mixing and production, except they’re lessons I’d already learned well from listening to the work that George Martin (and his engineers, Geoff Emerick and Ken Scott) did with the Beatles. And Gates, even on his best day, was never Paul McCartney. 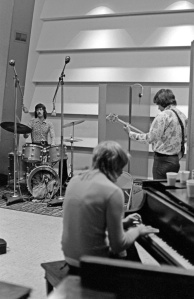 Bread in the studio. Unless I’m mistaken, that’s Gates on bass

Some of my own, not-influenced-by-Bread work: