When the white flame in us is gone,
And we that lost the world’s delight
Stiffen in darkness, left alone
To crumble in our separate night;

When your swift hair is quiet in death,
And through the lips corruption thrust
Has stilled the labour of my breath–
When we are dust, when we are dust!

I’ve recently had a mind to investigate the Fleetwood Mac interregnum of 1970-1974, the period between Peter Green’s departure and the arrival of Buckingham and Nicks. I picked up Bare Trees (1972), largely because I recognised a couple of song titles and because of John McVie’s beautiful cover image. I was intrigued to find out what the group were doing in this period: continuing the Green-era’s soulful white blues? Trying to find their way to the foursquare California pop that would become their trademark? Or desperately groping around for a direction, under the leadership of several different guitarist/writers?

Something of all three.

The pleasure of investigating these lesser known Fleetwood Mac albums is not to listen for how different they’ve been down the years. Green, Jeremy Spencer, Danny Kirwan, Christine McVie, Bob Welch, Bob Weston, Lindsey Buckingham and Stevie Nicks – any band that has been a vehicle for songs by as many writers as this should sound different over time. The eye-opener is how often they sound like, well, Fleetwood Mac.

There’s a Fleetwood Mac groove, for one thing, established in the early seventies, several years before Dreams made it the rhythm section’s calling card – mid-tempo, 4/4, strong backbeat, 8th notes on the hats, ‘heartbeat’ kick drum. But there’s also a mood, a feel, that is present throughout their career, an introspective mood of dusk and twilight that borders on the mystical. It’s there in Green’s Man of the World, in Kirwan’s Dragonfly, in Welch’s Hypnotized, in Buckingham’s I’m So Afraid, and in countless Nicks songs (Rhiannon, Gold Dust Woman, Sisters of the Moon, Storms). Perhaps they have got extraordinarily lucky that new singer-songwriters came and went whose styles overlapped and created a thematic through line. Maybe the mood is something that the group creates and that their songwriters are able to tap into. But it’s there, and it’s kept the group recognisable and intact in spirit through all of their line-up changes (except the post-Buckingham and Nicks line-up that cut Time in 1995, but we won’t count that out of respect for their legacy).

Danny Kirwan, as mentioned above, has one well-known entry into this canon of Fleetwood Mac über-songs, but it’s not his only, or even his best, song in that vein. That distinction belongs to Dust, from Bare Trees. A startling death meditation with lyrics taken from a Rupert Brooke poem (Dragonfly’s lyrics are also adapted from a poem – Kirwan was not a confident lyricist and this method helped him to finish his songs), Dust is a delight for chord-change connoisseurs. My favourite is the drop to an unexpected F#m halfway through the refrain. Kirwan deserves to be remembered for his songs as much as for his guitar playing in tandem with Peter Green – while he was a vital part of Fleetwood Mac’s blues-band days, his talent for writing melody and creating mood through chord changes came alive when he moved away from blues harmony into dreamier, more (dare I say) British, places.

Like much of Bare Trees, Dust is a treat. 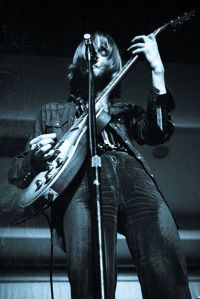