J Mascis is the alt.rock guitar hero and Lou Barlow the bass player who stepped out of Mascis’s shadow to become an acclaimed songwriter in his own right, so Murph has played the stereotypical bassist’s role in Dinosaur Jr: the steady Eddie, the reassuring, dependable presence. The guy who’s pivotal in making it all happen but who you don’t always notice.

Murph left the band after 1993’s Where You Been, and Mascis took over the role of studio drummer for the last two Dino albums during the band’s first run, Without a Sound and Hand It Over. As is so often the case, you notice what a musician brings to the table most when they’re not there any more. Those two albums had some fine songs on them (Hand It Over‘s Never Really Bought It is a classic), but I miss Murph’s playing constantly. Mascis has nothing like the same authority behind the drums, he hits the brass too hard and he pushes the backbeat (hey, maybe I don’t like his playing because it reminds me of everything I worry that I’m doing wrong in my own playing).

Great rock music is about drums first (sole exception: Neil Young), so Dinosaur Jr are a great band only when powered by Murph. It’s true today; it was true in 1987. In Our Band Could Be Your Life, Michael Azzerad’s survey of the American post-hardcore scene, Lou Barlow complains that Mascis never appreciated the time and effort that he and Murph put into becoming a solid rhythm section for him. The book was written during the years of Barlow/Mascis animosity, and his complaints may have been overstated, but it’s true that something did click into place between he and Murph in the gap between You’re Living All Over Me and Bug, which perhaps came from the extra time they spent rehearsing as a duo. Their finest moments as a rhythm section (during the band’s first stint) are arguably all on Bug.

Chief among them is Yeah We Know, a virtual showcase for everything that’s great about Murph. The verse part is an obbligato for toms, snare and crash cymbals, repeated in full four times, which is replaced by a straighter 4/4 rock beat in the chorus, albeit one with very tightly composed snare fills every few bars (the patterns are repeated verbatim in all choruses) and a rumbling tom fill starting on the sixth bar of each sequence that climaxes with a hugely reverberant snare flam (the most artful production touch on the whole album). Murph takes something of a backseat during Mascis’s solo, merely repeating his established chorus patterns, but then comes his shining moment: a glorious middle section where Murph plays his most powerful, but most complicated, tom and snare patterns in tandem with Mascis’s wah-wah riffing and Barlow’s grinding distorted bass. Murph calls on some of the ideas used elsewhere in the song (laying off the hats, making heavy use of the rack and floor toms, using the crash cymbals to accentuate strong beats within the snare drum pattern), but taking them as far as he can. It’s Dinosaur Jr pretty much distilled to their essence, one of the most exciting passages of rock music I’ve ever heard.

Murph is so unsung, it’s untrue. 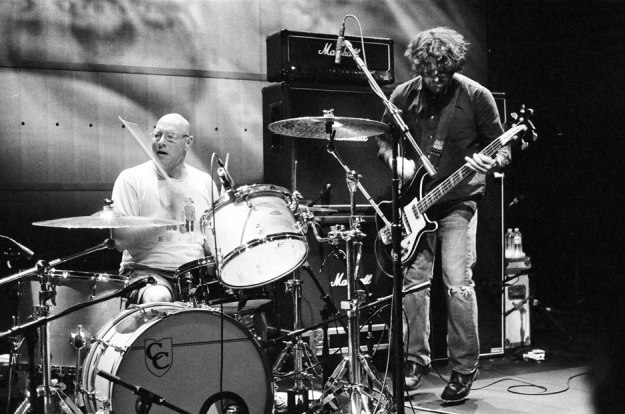