So all that said, how were the band?

This is the second time I’ve seen Camera Obscura, and curiously, both were times they were the final band on the bill at a one-day festival. The first was in Southend in a park (at Village Green, a festival that I’ve played at with an old band, Carterhaugh, and worked at as a sound engineer). That day they were playing to a very mixed audience, another drunk audience, and struggled a bit to get the attention of the crowd, most of whom were picnickers who had long since stopped paying any attention to the tiny people on a stage 100 metres away.

A few years down the line from that show, faced with similar problems, they weren’t thrown and turned in a good performance, although as I said Tracyanne Campbell was unsmiling for most of the set, if not actively angry at facing the same old problems of playing near the end of a day-long event to an audience that’s not really your own. As the room started to empty halfway through the set, leaving behind just those who really wanted to be there (a decent proportion of whom knew the words and cheered intros and danced in a genuine, into-the-music kind of way), she did loosen up, smiling and cracking the occasional joke.

They played pretty much everything I could have hoped they would: Tears for Affairs, Lloyd I’m Ready to be Heartbroken, Honey in the Sun, French Navy (to start their encore – they’d finished with enough time to spare to come back on for a couple, but did seem genuinely pleased at the volume of the audience as we called for more), If Looks Could Kill, This is Love and surprisingly, given the volume of the crowd’s chatter during the first half of the show, James. James is one of the group’s most delicate, beautiful songs, and it would have been lovely to hear it without a load of distracting chatter, but alas. Maybe next time I see them. Lloyd, French Navy and Do it Again were probably my highlights (Do it Again live has more of that slightly buzzy, early-eighties New Wave thing that’s subtly present in the recorded version; if it’s a pointer towards where they’re going next, I’d be fine with it).

Campbell was in great voice and the band all played well. They don’t have any real standout musicians among them, but all of them show good judgement in working out what the song needs and playing just that and no more. The sound was better than it had been during the Antlers’ set (that band’s singer, Peter Silberman, had said on stage that he knew the sound was “boomy and muffled”, so the musicians on stage obviously faced some challenges from the acoustics), with the bass less overpowering, and better clarity and oomph from the drums (during the Antlers’ set, the snare drum in particular was very contained and very dark, with no crack and no power: a shame since their drummer was far and away the best thing about the band).

One of those shows, then, where the band does the absolute best they could have done from a very unpromising set of circumstances, and the gig ends up being enjoyable despite the shortcomings of venue and crowd. But I’d love to see them in a clearer sounding space. Perhaps Kings Place is a little too far the other way – a little too antiseptic, and a little too small – but it’d make an interesting comparison. Can someone make this happen for me, please? 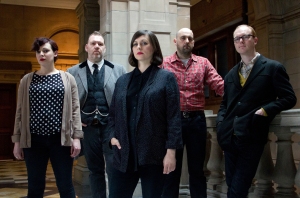